KOMPANÍA's 4th album comes with a whole new sound and new approach to the greek traditional music. Combining elements from various folk music genres, like reggae, funk, country and of course rebetika and smyrneika, we introduce to you the magical place inbetween Weast and East...

We are very happy to announce a new collaboration, with percussionist Kostas Spiratos, one of the best of his generation, who completes the rythmic part of the band!

Also, we proudly announce our summer season gigs in the historic "Harama" of Patras! The best summer venue of Greece and one of the most beautifull places you will ever see in your life! A magical journey to a scenic greek village of past decades, full of nostalgic memories, literaly an experience for everyone!

KOMPANÍA will be performing in "Harama", every Summer Wednesday!!

We don't add news very often, here in the blog, but when we do it's usually for something big...

So this time we can announce the new line-up of KOMPANÍA!!!

We happily welcome our two new members, Giorgos Papadopoulos (Guitar) and Michalis Darmas (Double bass), who will surely give an extra magic touch to the rythmic part of the band!!

At the same time we want to say a big "thank you" to our brother and former guitarist Nikos Protopapas. Thank you Niko for being such an important part of this big journey, all those years!!!

We are happy to inform you that until the "Crisis" album comes to the record shops, iTunes and Spotify, you can order it on-line via Musical.

The "Crisis" alboum is here!!! After the release party in Gothenburg (Sockerbruket Arena), it's time for the official presentation in Athens.

On November 7, KOMPANÍA will be waiting for all our friends at "Gialino Music Theatre" (www.gialino.gr - Sygrou Av. 143), for an unforgetable night! Free entrance - Reservation obligatory - Don't miss it!! (Doors open at 21:30)

After two successful albums, both ranked in the European top10 (#5 & #7 in WMCE) and four years of international tours (Austria, Belgium, Germany, Holland, Sweden, Switzerland) KOMPANÍA present their 3rd cd! With new persons in the band (Ioulia Karapataki & Thodoris Petropoulos) and a new cooperation with Concerto from Sweden, the new album with the bilingual title "Κρίση / Crisis" will be released by the Swedish company Nobel Records and will be first presented in a release party in Goteborg (Sockerbruket Arena - 8 October 2016) before the spring - summer 2017 European tour.

The new cd is a compilation of classical and rare rebetiko songs' covers, plus a latin/balkan version of the 1930's song "The crisis", featuring the band Faela! The Greek release party is soon to be announced also!

We are happy to announce the beginning of a new cooperation for KOMPANÍA with the Swedish concert and booking agency "Concerto" (www.concerto.se).Our cooperation starts with the release of a new (3rd) album and a Scandnavian tour for 2017!Details soon to be announced!!!

A big thanks to all our friends!!! Watching our new promo videos resulted to be ranked #2 and #4 in "Ethnocloud's top40 videos" for March 2016 (http://ethnocloud.com/world-music/charts)!!

Thank you for the support!!!

"SOLIDARebetika" Musical Collectivity (solidarebetika@yahoo.gr) calls more than 50 top rebetiko artists, to join forces and sing together, in order to gather food, medicine and other essentials for the refugees from Syria & Iraq. Of course KOMPANÍA will be part of this project! The entrance is free, so come with your hearts full of solidarity and your bags full of food, medicine and everything else that you will find in the special list published, at 21st of May 2016, from 19:30, in "Ilion plus" music stage!!! For details check here:

A very special night will take place on 21.3.2016 and KOMPANÍA will be part of it! The 21st of March is the "International Day for the Elimination of Racial Discrimination" and at that same date a lot of rebetiko artists will come together in Athens and sing to gather food and medicine for the refugees from Syria and Iraq. More details very soon...

Finally, we are back!!! We can officialy announce and welcome the new "KOMPANÍA" members, Ioulia Karapataki (lead singer, guitar) & Thodoris Petropoulos (bouzouki, vocals), two of the most promising musicians of the new generation in Greece! We also promise a lot of exciting news very soon... Keep in touch!!! 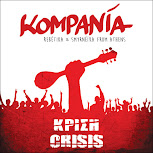 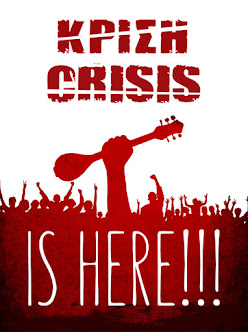 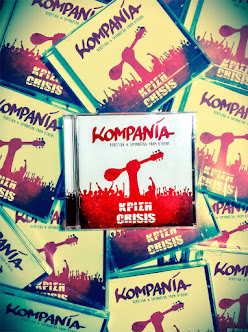 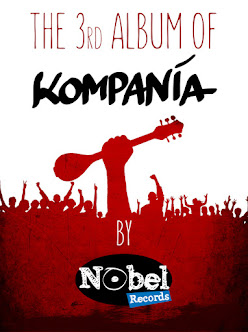 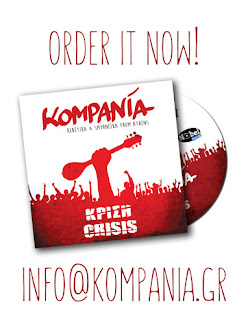